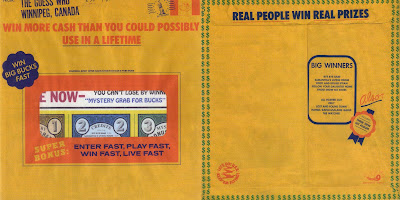 "Artificial Paradise" is an album released in 1973 by the Canadian rock band The Guess Who.
Musically, Artificial Paradise finds The Guess Who showcasing a variety of styles: gutbucket rockers ("Orly"), bellicose classic rock ("All Hashed Out," "Rock and Roller Steam"), ballads ("Samantha's Living Room," "Lost and Found Town") and a failed stab at world music ("Hamba Gahle-Usalang Gahle"). Throughout the album, singer/pianist Burton Cummings full-throated wail is employed to maximum effect, while the rest of the band provide competent hard rock backing.
Nevertheless, the album is likely best remembered for its artfully rendered record jacket, which lampooned the lures and cures of consumerism, cleverly disguised in a bogus direct mail package.
Despite this high-minded commentary - or, perhaps, because of it - the album's sales figures fell far short of projections. As a result, it became a staple in cut-out LP bins all across America and Canada during the late 1970s and early 1980s.

Email ThisBlogThis!Share to TwitterShare to FacebookShare to Pinterest
Tags: ape, Artificial Paradise, lossless, The Guess Who