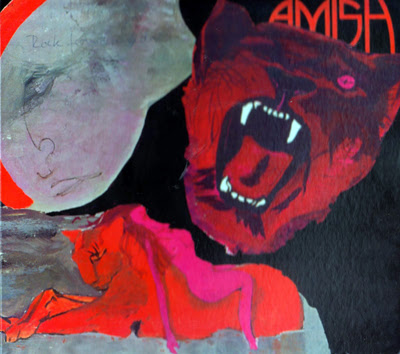 Following the demise of FJ & The Impressions at the end of the '60s, Galt, Ontario natives keyboardist Ron Baumtrog and bassist Mike Gingrich were looking to head down a different musical path. Their old band was a covers band doing R&B, but when frontman Doug Stagg and drummer Jack Byrne came on board, Amish was born. They added guitarist Jack Botts, a draft dodger up from Michigan, and started out playing covers of more blues-basedpsych-driven rock, including McKenna Mendelson Mainline, The Doors, and James Gang.They became fixtures on the Toronto circuit and with manager Bill Gefross, got them an audience at Detroit based Sussex Records. Dennis Coffey and Mike Theodore were both not only staff producers, but also had experience producing some of Motown's hottest acts. Because of his boycott of the Viet Nam War, Botts had to stay behind, and session guitarist Joe Gutz was brought in to GM Studios.The band was being courted with US tour offers, and so after returning home, replaced Botts with new guitarist Bob Norris, ex of Oasis. Distribution was picked up by Buddah Records, but by the time their self-titled debut album was in the stores in the summer of '72, Kim Neil (also ex of Oasis) had replaced Byrne on drums.A mix of organ-driven fuzzy guitar-laden songs that crossed the psychadelic fence over to greener pastures of 'mature melodies.' Although "Down The Road" was intended to be released as a single, none were. Still, with a cover of Traffic's "Dear Mr Fantasy" and a good blend of production and tight writing was evident in other tracks like the leadoff "Sad Girl," "Help Me" and the Uriah Heepish "The Sea."A handful of American dates complimented some more touring around southern Ontario, and the band recorded some sessions around the Toronto area. But when Buddah folded, they were left with an album in the can, and no one to pick it up. By mid '73, Baumtrog left and Gerry Mertz was brought in as the new keyboardist. They carried on theroad for a couple of years while trying to find a new label. Mertz's departure dropped the band to a foursome, and by the end of '75, everyone went their separate ways.Everyone got out of the business all together, except for Gingrich. After finishing out the '70s with a brief stint in Nightwinds, he toured with Klaatu for a year, then re-surfaced on the West Coast in the early '80s. There, he stayed busy for the rest of the decade touring with the likes of Headpins and Holly Woods and Toronto, among others. Doug Stagg passed away in 1999.The band's only album was re-released in 2007 by German-based Second Harvest Records, but without any bonus material.