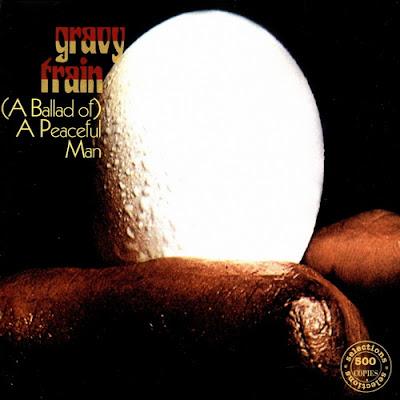 Gravy Train were a progressive rock group from Lancashire, England, formed by vocalist and guitarist Norman Barrett in 1970. Together with J.D. Hughes (keyboards, vocals, wind), Lester Williams (bass, vocals) and Barry Davenport (drums) they recorded four studio albums. The first two were released on the Vertigo label and the latter two by Dawn Records. The band was dissolved in 1974. Little is known what happened with its members except for Norman Barrett, who appeared in Mandalaband for their second and final album in 1978. He went on to found the Barrett Band, which recorded albums in the early 1980s. Released in late 1971, (A Ballad of) A Peaceful Man was Gravy Train's second - and probably their most praised - album. Unlike their heavier debut, this album sports some lovely string arrangements, provided by Nick Harrison. A unique feature of the album is that it splits the heavy tracks from the lighter tracks: all the ballads are on side 1, while all the rockers are on side 2...