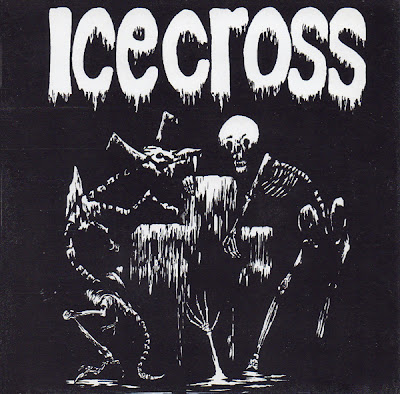 Copenhagen in the autumn of 1972, the crucible for Icelandic hippies, where the Free State of Kristiania held the promise of a better world where everyone was equal, providing according to available resources, partaking as needed. We celebrated the one year anniversary of Kristiania gathered around a great bonfire and promised to turn the Free State into a model of cooperation, togetherness and solidarity a sort of primal Christianity.
The club Revolution in Copenhagen was the place to listen to live
music, all the latest and freshest. Usually it was rather bland stuff, I found, but the there appeared this amazing rock band, so amazing that we were left gaping and staring Icecross hard as nails and supertight. When the boys had finished playing they mingled with the audience, having a beer or perhaps lighting up a pipe. It turned out they were Icelanders living in Kristiania with big dreams - fully justified judging from their performance that night.
For several reasons Icecross never made it. My understanding was that they got tired of the struggle abroad and wanted to go back home. They did, however manage to cut a record bearing the name of the group. A superb record I listened to a lot, until it gave way to newer music lying in the stack but enjoying short-lived revivals off and on over the next few years until it suffered the inevitable fate: too scratched and contaminated with booze to be playable.
Decades later, searching for old music, I started to come accross the record here and there on collectors' lists and for no small change - one wanted to buy it for $200 and another to sell it for $500. People were starting to talk about “the legendary and mysterious Icecross” but there were far fewer sellers than potential buyers.
As time went more and more copies started cropping up and further investigation revealed that the record had been reissued in various places. One owner offered for sale a record which had been published in Holland, another had a copy from Italy, and suddenlty someone was advertising a CD made in Korea. Everything strictly illegal but showing the widespread call for this marvelllous recording.
The Internet revitalized the sale of Icecross. At the time of this writing, a simple Google search reveals at least five different bootleg publishers which bears witness to the place accorded to Icecross in the history of rock music.
Árni Valdimarsson 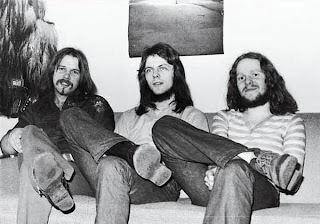 Do you know what would be great....? If you would post your friggin` PASSWORD. I mean, there are NEW FOLKS who come here, you know!

Fantastic band
Thanks a lot my friend
Kisses

It was a demo released by the band themselves in 1973.
The album was recorded in Rosenberg Studio Copenhagen 1973 Issued in Iceland. And just 1000 copies were made.
Published by Icecross Records.Their album has been legendary among collectors for years.
Monster heavy early 70's Icelandic unique hard rock progressive.
Featuring killer guitar passing through leslie speakers and effected bass and also huge use of bow on the guitars creating a perfect heavy guitar album. One of the best albums along with Hurdy Gurdy, Culpepper's Orchard and Svanfridur etc..Icecross were darker and probably the only Icelandic band inspired by Sabbath at that time from the Nordic countries.

History Icecross started in Iceland, where three hundred thousands of people had a mass of groups born worldwide rock - boom. At the beginning of 1972 - the year the two rock -musicians - Axel and Asgeir went to my friend Omar and asked him to be a bass - guitarist in their a new group that will play only their own muzyku,while it was very difficult to make money to life, doing that - then the other, except for the songs The Beatles and other foreign stars, but Omar was willing to try it. Rehearsals in which musicians produce their own sound, were of course in garages. Soon the boys met with Amund Amundsen - an agent, look for work for of rock - groups. With his light hand, they were work in a small town bar Westmann Islands.
The first statement on which the band performed their Song were unsuccessful. From - to the growing dissatisfaction, Icecross were on the verge of collapse. But one night on stage with his brother Local rose tucked into the microphone and announced that the music he likes, and therefore should enjoy all. U guys an opportunity to rehearse and act continuously, but they soon realized that Iceland is too small a country to to achieve this great uspeha, search of fame was decided to move to Copenhagen. In those years in Copenhagen was a large colony hipi,organized the Free State of Christiania. A popular
the place was a club Revolution, where the rock - on stage performed his music, then went down the hall chat with the audience, to drink beer and smoke.... It is here Icecross and performed six days a week. The success was stunning. Here is how witness their performance on the evening of the anniversary Christiania: "The energy pouring over the edge, zafuzzovannye Amplifiers toil, lamps explode, and unperturbed northern boys with plasma in the blood veins have time to pick up the acoustic guitar and Three minutes to dilute all this frozen hell infernal rock 'n' roll song about lost Love. "The skill and teamwork grow with each passing day and it's time to think about recording plate. In one of the days, there were guys in the studio Rosenberg. Sound Engineer Tommy Seebach not only helped them to record, but also played the piano beautifully in song Omar A Sad Man Story. The album was released limited edition and all subsequent years was an expensive rarity. It is difficult to understand why at the crest of the success of the group ceased to exist. Perhaps the reason for that
extreme tiredness, or a longing for his native Iceland. Either way, they returned home and continued their future career separately, and not becoming superstars.
I like it, an album worth all the money....
Alex many thanks for the share!