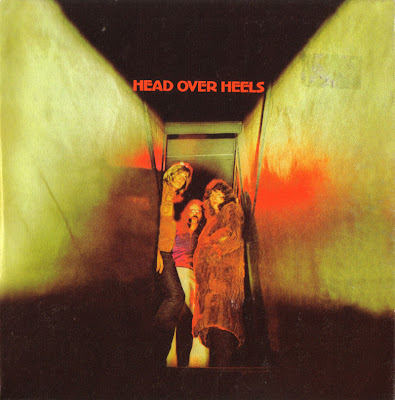 Head Over Heels is a hard rock trio from Michigan, which is a group had been based in Detroit this work, the album was released only from USA Capitol in 1971, Some of the material created during the concert expand the unique guitar trio, a bluesy hard rock of Detroit typical sense, to Drive in line to fill a gap of vocal drum and natural hard rock One of the loudest acts of their time, this based power trio made only one album, which stands as a lost proto-metal classic. A product of the same scene that spawned The Stooges and MC5, they play raw and dirty on a superb selection of self-penned material, as well as a molten cover of blues staple perfectly showcasing take on crunching hard rock and searing power ballads.
Produced by Dan Moore and Buzz Clifford, 1971's "Head Over Heels" is simply great. Loud, tough, yet surprisingly accessible, material such as 'Road Runner' and 'In My Woman showcased the trio's knack for melodic, but crunching guitar rock. Frank and Urso had attractive voices and as we said before, they sure could generate some volume. Among the few missteps were some out of kilter harmony vocals ('Question') and the bland power ballad 'Children of the Mist' (which was almost redeemed by Frank's nice guitar solo). Elsewhere, recorded at Detroit's Eastowne, an extended cover of Willie Dixon's 'Red Rooster' and 'Circles' were live efforts that aptly showcased the band's impressive in-concert chops. Wish we'd seen 'em live ... Frank and Urso reappeared with the band Fresh Start. Urso was also a member of HUB and a late-inning member of Rare Earth.
Alex, Thanks for the reminder in my memory

Hi hanalex, can you re-up again this album? thanks!