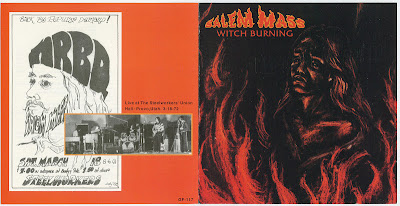 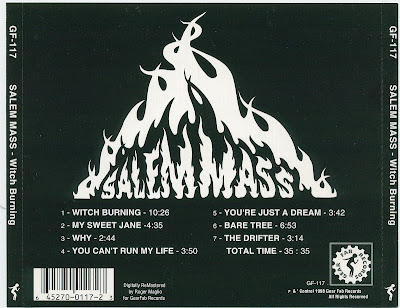 Recorded in 1971, someones consider a supergroup of a disc only, others only as a curious ocult-rock and in the era of Black Sabbath
The truth I like this cd since I found the vinyl for over 20 years in a used record store

I admit that I really like this album, Yep this is awesome from hell- play...American group combines dark, heavy rock with elements of progression. One of the first albums, which uses the Moog synthesizer.(Using serial number 023 Moog Synthesizer!!)


Early occult rock anomaly, Salem Mass, released a single record recorded from a bar-converted-to-makeshift-
studio somewhere in Idaho. Often hailed as an obscure gem lost to the washes of time, Witch Burning offers an interesting blend of psychedelic rock, screeching vocals, and noteworthy use of the Moog synthesizer.
Let me preface this by saying I am not exactly sure which gentleman performed the vocals on the title track, “Witch Burning” on Salem Mass‘ only album, but this man sounds like a fucking maniac. He screeches and pierces the ear in a way that makes David Byron of Uriah Heep seem like an angelic crooner. You’re either into these abrasive vocals (especially for the time) or you’re going to hate them. Interestingly enough, the vocalist changes for most of the album. Instrumentally the keyboards run most of the melodies giving it a progpsych tang while the guitars keep the album rooted in hard rock and proto-metal. The title track has a six or seven minute instrumental interlude with some of the LP’s best guitar soloing and showcasing it’s most progressive moments.
The Moog synthesizer gives this occult album a very space rock feel on almost of the tracks on Witch Burning, and used in an extremely unique way. Had Salem Mass continued to produce albums and achieve some sort of artistic recognition, the way heavy metal and psychedelic rock would’ve played out in the 70s and into the 80s could have been changed forever. Jim Klahr’s use of the Moog is extremely, I mean just ridiculously eerie (“My Sweet Jane” is a great example). It’s creepy melodies and atmospheric humming adds a very spooky layer to the evil lyrical content. In a landscape dominated by Hammond organs, it makes the album standout.
I Definitely recommend Witch Burning by Salem Mass to collectors and fans of the genre – most others are not going to have much of a frame of reference for this obscure album. However, it has some interesting concepts that were just itching to be developed further.
Heavy Organ, Outstanding Vocals, Fuzz Guitar, Pounding Bass, and Drums that wills shake your wall! Turn up the volume on this one!!!
This music sounds fresh even today.

A wonderful album!
Thanks for posting!

You are welcome my friend
Kisses

VERY VERY WONDERFUL!!!!!!!OLDBITCH HAS NO MUSICAL TASTE, BUT THIS ALBUM IT'S A RARE GEM! THANKS!
MrRockeveryday