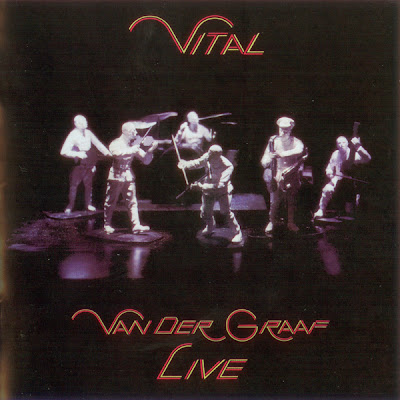 Originally released as a double LP, this eight-song live album makes a perfect 75-minute CD. The lineup (uncredited) was Peter Hammill on vocals, guitars, and keyboards; Nic Potter on bass; Dave Jackson on saxes and keyboards; Guy Evans on drums; and Graham Smith on violin, keyboards, and vocals. The recording quality is surprisingly good, with a close, intimate sound, which is the only way one could properly capture this band live and not have the results come out like a bunch of noise. As a title, "Vital" also accurately describes the disc, for the group presents the raw, up-close, in-your-face approach that made Van Der Graaf Generator favorites of the punk bands despite the group's prog rock origins -- between Hammill's loud, raspy vocals and his crunchy overamplified guitar, "Still Life," "Door," and "Pioneers Over C" all sound almost like punk band performances, and the medley of "A Plague of Lighthouse Keepers/The Sleepwalkers" isn't much different despite the presence of a violin in there.