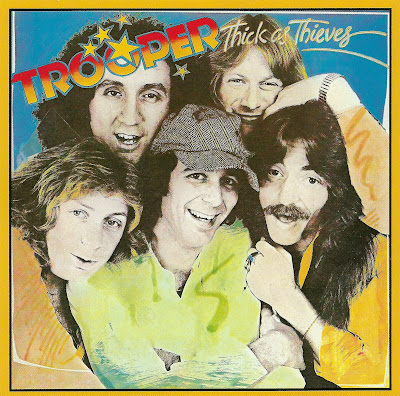 Wikipedia: Thick as Thieves is the fourth album by Canadian rock band Trooper, released in 1978. The album was produced by Randy Bachman of Bachman-Turner Overdrive and The Guess Who fame. The album went double-platinum and featured the group's only successful U.S. single, "Raise a Little Hell". This album also contained the hit "Round, Round We Go" written and sung by Frank Ludwig, and "The Moment That it Takes" written by Stewart and Underhill and sung by Ludwig.

Trooper's fourth album, "Thick as Thieves", contained the hits "Raise a Little Hell" (their first and only hit in the U.S.), "Round, Round We Go" and "The Moment That It Takes". It shipped gold, and later double platinum. Producer: Randy Bachman
Release Date: June 19th 1978 MCA 2377

And It's no exaggeration to say that Trooper has become a Canadian legend. They continue to perform their huge collection of hits with the vitality and sense of humor that has served them well on their steady march through the hills and valleys of Canadian Rock and Roll. "We're Here for a Good Time (Not a Long Time)", "Raise a Little Hell", "The Boys in the Bright White Sportscar", "Two For the Show", "Pretty Lady" "Good Ol' General Hand Grenade", "Round, Round We Go", "Santa Maria", "Janine" - just a few of the Trooper hits that, according to writer Ryan Sparks, "have woven their way into the fabric of this country like no other bands have been able to do. Tune into any radio station from Vancouver to St John's and you're bound to encounter one of their dozen hit radio anthems that are still featured in heavy rotation to this day."

@Alex thanks a lot