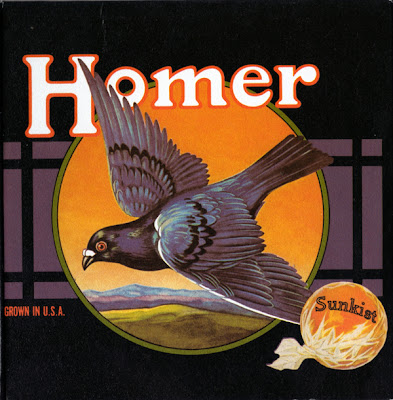 Album, recorded by Homer I got to know dozen or so years ago end of the 90's... buy him on the flea market -pirated pressing
Russian edition ( - rip of tired old vinyl,crackles, clicks and frying all sounded awfully or rather tragically) followed to buy issued by Akarma and, unfortunately,although it is not ideal sound but so it is significantly better!.

Rare early '70s US psych piece that mixes hard edged harmonic psych rock with country influences.. This is a great US psych/prog album from 1970. Great guitar works with of country rock on this San Antonio(state in Texas) out fit's only album. Imagine a progressive rock version of The New Riders Of the Purple Sage!.
It never hurts to give a second chance to something that at first it may have seemed boring, average,and even pathetic,Homer is one of those bands that grabbed them at first taste, but with a heard second completely changed my opinion ...

This band from Texas who in 1970 released their debut and only album titled "Grown in the USA", which presents a psychedelic folk with the seal of the '60s Texas with a slight taste of proto-progressive, their sound is comparable with the group (also Texas) Fever Tree, but with a country flavor, so the album is very interesting, because we can find shades psychedelic folk songs, touches of country, slightly fuzz guitars and basses, and some influences mellotron classical music, so the album offers a very interesting and high-quality music,is one of the best albums that could offer Texas psychedelic scene between 1966 and 1976.
Homer was one of the better promising, psychedelic/hard rock bands to come out of Texas... killer gutiar based psych with real acidy, swirling leads (from Galen Niles pre-Ultra), real good songs, strong vocals. It's a slightly mixed bag, to be honest, fusing psych,hard rock and, er, country into a sort-of interesting stew that doesn't always work, if truth be told. After psychedelic hard rock opener 'Circles In The North', the pedal steel puts in an appearance on the next couple of tracks, particularly on 'Dawson Creek', almost a straight country rock song. The rest of the album veers between the rock and country sides of the band, often during the same song, with twin guitar leads battling it out with pedal steel balladry in an almost unique mix of styles, but primarily from the strong influences of the British progressive rock - with mellotron, with cool improvisations (although the record is not long ) and sudden changes in rhythm! Great, full of emotion and melody and only two, a bit weaker (but still it cool! fragments)

Rob Meurer plays Mellotron on most of the records, which must make this one of the earliest American 'Tron (as against Chamberlin) albums. Most of his use is nice, upfront strings, although flutes and even brass rear their misshapen heads occasionally. Meurer seems to use practically no other instrument, although the odd synth line puts in an appearance, sounding like an old Moog III.

Although it is not perfect I LOVE THIS ALBUM!!!!!!
This is the real windfall for fans 60s guitar psychedelia.
Absolutely essential!

The new Message:
There also great new position Swedish company Flawed Gems. Release:2009-09-12. The Swedish remastered reportedly sound well (probably ripped from the original vinyl worth $ 800), although it is not brilliant since the original material was released private effort, small label with a zero budget (sometimes you can hear a slight noise also present on the original stamping LP)

Homer 'The Complete Recordings' album by was released Jun 19, 2012 by Gear Fab label GF 260CD. A historic release in Digi-Pak format. They had their early beginnings as the Outcasts and some members played on the Stoics/Mind's Eye 45s reissued on The Children Anthology. While their 1970 LP is very highly rating rarity, their three 45s are even rarer. Newly discovered tapes have uncovered unreleased songs and demos. All are included in this comprehensive collection. A very young Christopher Cross participated on some of the tracks of the LP.

Adam, thanks for all your comments.

Alex, It is pure pleasure for me...all the best!