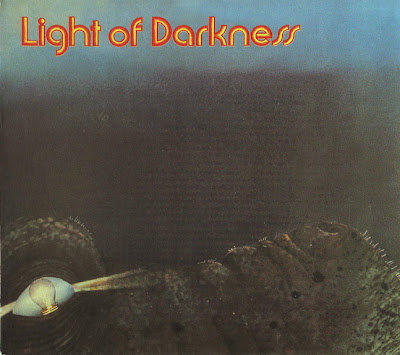 The little-known Scottish band Light of Darkness consisted of Mike Reoch (bass, flute, piano, harmonica), Byron Grant (guitars, fiddle), John Latimer (vocals, piano, organ, percussion), and German drummer Manfred Bebert. They were based in Hamburg, Germany, and their only record was released by the German label Phillips in 1970. This self-titled debut album is in a kind-of progressive blues-rock style, highlighted by Latimer's odd voice and an energetic cover of Tony Joe White's "Soul Francisco." However, critics at that time dismissed the record as being directionless; the record-buying public ignored the LP and after a couple of concerts, Light of Darkness disbanded. Today, their only recording has become a minor cult classic and a collector's item. Unfortunately, the bandmembers disappeared and never recorded again. Before Light of Darkness, both Reoch and Grant had been in a band called Mike Reoch and the Tremors (together with Dennis Morrison and Don Stuart), and released an album called "Internationale Evergreens" on Elite Special in the 1960s.

A group founded by three Scots living in Germany.
They created an original sound, influenced by heavy rhythm'n'blues, in order to succeed. Mike and Byron, both former school members, were born in Brechen City, Scotland. They had played together in different bands for many years. After amazing experiences as opener for some early Rolling Stones gigs in Germany they settled down in the club scene in Hamburg and met a real useful singer, keyboard player and Star-Club veteran called John Latimer. They were three Scots now. A short time later, Manfred Beben, the only German, was recruited for drum duties. Light Of Darkness appeared on the stage of the business. Our fabulous four came into contact to Mr. Herben Hildebrandt, a member of a very famous German beat-group called The Rattles and producer, who had lots of effective contacts to major labels. LOD recorded several demos, which had been sent to Philips. The result was a great success.

Because of their record-deal with Philips 1970 became an important year in the bands career and everything still looked rosy. All the album recordings were produced in a real professionell sound by Herbert Hildebrandt. Unfortunately Philips wasn't able to give the band the necessary support. The artwork missed usual liner-notes and other important information. Instead of writing about LOD's musical talent and the characteristic of their songs the promoters gave a false picture of the group:
"...No musically scheme... a bit progressive, a little psychedelic... blues influences... also hard rock... butal sosome folk... three Scots and one German, who break into a laugh by listening to Scot's jokes... no style..."
In practice,their sole album, which is now the analog version rarity ( CD on Second Battle resumed it). The repertoire on it a few rousing, highly energetic recordings, hardrock with a drugged vibes, howling vocals which deserves special attention 9 minutes track version of Tony Joe White "Soul Francisco". After recording the album hearing-about a group lost.
While band still toured through Germany and Europe and played many gigs at Krautrock festivals
One can only guess that this is due to financial troubles and the craze for "kraut rock" promoted in the German media and was the result of such a management.
Thx Alex!