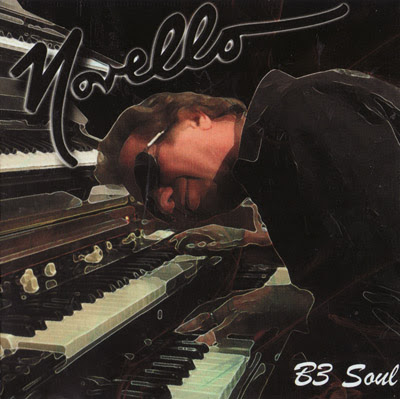 Keyboardist/composer/arranger, and producer, John Novello has played and worked with everybody from Chick Corea, Ritchie Cole, Hubert Laws, Andy Summers of the Police, Henry Mancini, Ramsey Lewis, to legendary rock bassist Billy Sheehan, Edgar Winter, Mark Isham, Donna Summer, Manhattan Transfer and A Taste of Honey. As a player he has a worldwide reputation in contemporary jazz and R & B/Soul on both acoustic and electronic instruments but most famously the Hammond B3 Organ.
Novello’s first solo CD “Tool Cool” was released to excellent reviews through ITI/Spindletop in the US and through Sentemo Records in Europe. His most recent solo record called Threshold, released on Holographic Records, is yet another offering of soulful Hammond B3 performances featuring Eric Marienthal on sax, Melvin Davis on bass, Eric McKain on percussion and Randy Drake on percussion. Recorded live at the famous Baked Potato in Los Angeles, this exceptional set has reached audiences everywhere with John’s unique Hammond B3 high energy on full display.
Novello, along with bassist Billy Sheehan, founded the now legendary progressive jazz blues rock trio Niacin based on Novello’s trademarked soulful B3 playing style and writing and features drummer extraordinaire Dennis Chambers and rock and roll hall of famer Billy Sheehan on bass. The first CD was released in Japan and Asia in July 1996 on Video Arts Inc; the US/European CD was released on Stretch/Concord Records in March 1997. Since then Niacin has toured the world and recorded 6 CD’s and their last release “Time Crunch” on Magnacarta Records is already heralded as one of the legendary progressive fusion records of all time. Niacin’s current release Organik has just been released in Japan and in the States and has already been picked by Jazziz Magazine as instrumental fusion record of the year 2006
Novello has also composed the score for the feature film, Au Pair, released in Europe and spent three months in Russia where he served as musical technical consultant and coach on the feature film Red Hot starring Donald Sutherland. John is currently scoring the music for the film The Pardon based on the true story of the only female to be put to death in Louisiana by electric chair - to be released early in 2008. Constantly reinventing himself, John teamed up with veteran producer/hit songwriter Andy Goldmark and created Novello B3 Soul which is a new contemporary jazz/hip hop project bring John back to his funk blues roots. Novello B3 Soul will be released March 2009 as a joint venture on NuGroove/NoGo records!

WOW...
I love the magical sound of the organ Hammond B3, strength combined with subtlety already at the very thought, I have chills all over my body ...
I can listen to and listen to no end ... in addition very good lots saxophone, work completed guitars topped it all in the right climate, the rhythm section ... and I miss only elastic-springing sounds contrabass ... but and so, the end result for me is thundering!

Alex,for me is fantastic post!
Thank you very much!
Yours,
Adam.

Hi Adam!
Hammond is my favorite instrument too!

With ‘B3 Soul’ Novello did not set out to purposefully create a soul jazz sound. In fact the funky vibe of many of the tracks evolved from work he did with his friend and multi song writer - producer Andy Goldmark. John Novello is also caught by the “organic” virus. Obsessed by this instrument he studied the music of Brian Auger, Keith Emerson, Joe Zawinul and more of these legends some of the quotes:

"John's improvisation and composition exemplify the spirit of freedom and sense of adventure Jazz is all about. John Novello! Check him out, he's one of a kind." Edgar Winter

"John Novello's B-3 playing is incredible; it's rare to hear someone pushing the B to the limit and having such a great time doing it. His compositions are the perfect vehicle for his wide-ranging musical interests and virtuosic chops. The combination of John's tunes and Niacin's over-the-top rhythm section pretty much guarantees an evening that's perfect for simultaneously mind-expanding and head-banging." Ernie Rideout, Editor in Chief, Keyboard magazine

"B3 Soul has got that Groove!!! In the pocket, nice and heavy. I love the changes!" Isaac Hayes

"Your 'Salt & Pepper' and 'The Message' from B3 Soul SMOKE! Great grooves and great keyboard playing! Congratulations. Chick Corea

"Novello is an outstanding gritty B3 blues player!” JazzTimes

“On Niacin’s latest CD Time Crunch” Novello, as he has done so often before, takes command of his instrument, unleashing a stream of furiously felt notes that are full of burn and always absent of compromise.” Jead Beaudoin Ghostland

“Novello’s wealth of sonic textures is almost unprecedented!” John Kelman, All About Jazz

"Niacin is like ELP on Sterioids. Novello plays fiery B3 licks that Keith Emerson should be playing!" Keyboard Magazine

"Novello is a white guy who plays with so much heart and soul that you'd swear when you look over his shoulder you see a gospel choir!" Legendary Bassist Billy Sheehan

For many years I have listened to, and thoroughly enjoyed John Novello's playing. His expertise on Hammond Organ and any other keyboard is immense and inspiring. The recordings he has produced with his band NIACIN, in the company of the mighty Billy Sheehan and legendary Dennis Chambers, are truly awesome. Composer, arranger and keyboard wizard, John has the full complement of musical talents. He deserves great acclaim. BRIAN AUGER, MARCH 2007

The final effect,Novello's album B3 Soul is Hammond B3 music sprawling around several genres. You get exactly what you await. Pure B3 fun.
@Alex, thanks again!