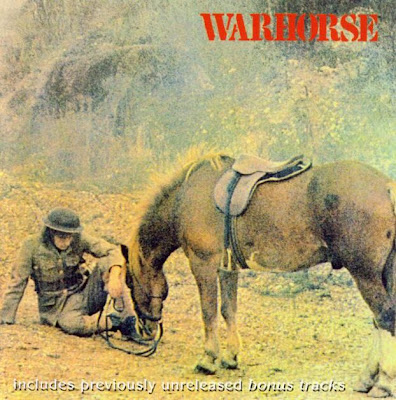 The bonus tracks are not on my original LP. Both Warhorse albums are great and essentials in any collection, even if i prefer their first effort. Thanks a lot hanalex, for this expanded and upgrade edition, and also to have answered to my request.

Within weeks of Nick Simper's final show with Deep Purple on July 4th 1969, he had played the Isle Of Wight Festival as part of singer Marsha Hunt's backing band White Trash, and was beginning to plan a new group of his own.

After just a couple of gigs with Marsha, Nick realised that the rest of her band weren't really up to the job, said as much, and found himself with the job of finding suitable replacements. He roped in Ged Peck on guitar (with whom he'd toured with The Flowerpot Men and Billie Davis), and his old Pirates band-mate Roger Pinner (aka Roger Truth) on drums. Pinner was soon replaced by Mac Poole. While this was going on Nick still found time for outside work, playing BBC sessions with The James Royal Set, and also putting together his own extracurricular band. Ged Peck and Mac Poole were first on board, followed by singer Ashley Holt, who had auditioned for Deep Purple back in 1968. The James Royal Set's keyboard player Rick Wakeman took part in early rehearsals but proved unreliable, and when the band's first demo was recorded in April 1970 he was replaced by Frank Wilson. Very soon afterwards the band became a full time operation when Marsha Hunt folded her group due to the fact that she was pregnant by Mick Jagger.

Initial events made it look as if Warhorse's starting path would be similar to that of Deep Purple Mk1.

A record contract quickly arrived (with the new Vertigo label), an album was recorded, and the band made their debut live show - supporting Mott The Hoople in Hemel Hempstead. 'Warhorse' was released in November 1970, sounding pretty much like a heavier version of Deep Purple Mk1, and fully illustrating how much Nick Simper had contributed to both bands. However, Vertigo's promotion concentrated more on the label than the album, and it undeservedly failed to chart, as did the belated single 'St.Louis' (an Easybeats song which had been in Deep Purple's live repetoire until August 1969). Around the same time, Ged Peck made his exit, apparently after increasing difficulty in dealiing with Simper's pre-eminence in the group. His replacement was Pete Parks from Black August, a band who had been sharing Warhorse's rehearsal room.

Warhorse had built up a healthy live following inside their first year, and continued to do so when Pete Parks seamlessly stepped in on guitar, but the band's fortunes had already peaked.

They were forced to rush the recording of their second album 'Red Sea', which nevertheless received favourable press reviews, and pushed the band's heavy credentials forward by being more guitar based than its predecessor. However, it received very little label promotion, and soon after its June 1972 release Warhorse were dropped from the roster.

Around the same time Mac Poole decided to throw his lot in with Gong, after having deputised with them for a few shows.

Their debut album, 'Warhorse', opening 'Vulture Blood' is what we hide - great. Ongoing minute organ intro goes smoothly efficient, though less sophisticated, riff. Although the verses and choruses are certainly interesting from the lyrical and shouted very vigorously, a highlight 'Vulture Blood' is the tens of cycles, during which the singer is silent. In the first part of the solo, simple and melodic, guitar is supported by the authorities, which is a nice introduction. When the guitar is no longer only a moment for yourself, show us your best side in the shortish - unfortunately - solo, after which the joint is re-played guitar and keys party. Conceived in this way compositional cabinet pleasantly surprised. The second track on the album - 'No Chance' - march theme starts (he also appears in the 'Burning'), from which emerges a guitar riff, followed by the vocals. Since this time the song is about feeling and a woman - vocals, by contrast, bitterly disappoint. In the end we hear solos and guitar body, hear them, moreover, we will also in future works ... Can kidnap and kidnap, but they sound pretty nice. Are also well suited to the songs and very well co-creation climate hard disc.

The strangest song on the 'Warhorse' is' St. Louis' (cover from the repertoire of The Easybeats.)
Why? It is simply a 'racial' hit, rubbing at times about making ... Village People! The end brings us a strong album 'Woman Of The Devil' and the wonderful 'Solitude'. This, lasts nearly nine minutes protest song is by far the best composition on the album. 'Solitude' announces the song 'I (Who Have Nothing) "from the second album Warhorse, but to look at the' Red Sea 'may come once time ...

Meanwhile, falls to try to draw conclusions from our wishful thinking. Warhorse seems to continue the tradition of the first three albums Deep Purple. Psychedelic, with more or less audible inspiration Vanilla Fudge, there have been enriched with heavy organ sound. Ged Peck sounds very similar to Ritchie Blackmore, and 'Ritual' was used the same riff as purplowskim 'wring That Neck'. Tracks on the album are interesting, varied and well-played. Ba! Plate 'Warhorse' is better than the first recording Deep Purple! If (... again!) This album came out a little earlier, it certainly would roll band career otherwise. And so ...? Warhorse, as I mentioned, he recorded only two albums. The team could not exist in the first division of music and the memory of it - requires regular vacuuming. And such a fate - in sum what if we - will have met Deep Purple, if not ...

Leave now ... but what if it barren and settlement of possible worlds! I recommend everyone (especially lovers of Vanilla Fudge area) with a clear conscience 'Warhorse', even though the musical path that has entered a team Nick Simper was already dead at the time of their debut album. Happy listening.