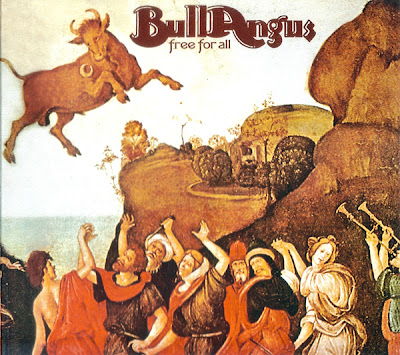 www.last.fm:
Known primarily to late 60s/early 70s vinyl fanatics, Bull Angus (a name inspired by the bull farms near a barn they’d rented for rehearsals) was a psychedelic blues band with significant prog leanings. Best evidence has them forming sometime in the late 1960s in Poughkeepsie, New York, by guitarists Larry LaFalce and Dino Paolillo. The duo was soon joined by Geno Charles (Drums), Frankie Previte (Vocals), Ron Piccolo (Keyboards) and Lenny Venditti (bass). LaFalce and Venditti were formerly with NY bands The Pyramid, Previte had been with The Oxford Watchband, and Piccolo a member of The Revells. With Vinny Testa producing, the group released a self-titled debut in 1971 on Mercury Records but poor marketing and sales meant that the band only issued one more album, 1972’s “Free For All”, before Bull Angus split up (although Previte will forever be a footnote in pop history for penning “The Time of My Life” for the Dirty Dancing soundtrack!).
It is odd that Bull Angus didn’t make a larger impact at the time; their brand of post-psychedelic heavy blues successfully crossed between jam-happy Southern Rock and budding Progressive Rock. The material was often compared to heavyweights like Uriah Heep, Atomic Rooster, Led Zeppelin, Deep Purple as well as homegrown Grand Funk Railroad, but the band’s dexterity and large roster meant they could occasionally leave hardrock behind and dabble in early Crimson-style folk. Despite all this, Bull Angus never earned a cult following and has remained underappreciated to this day.

I was looking for this, thanks

Their first is a great Lp with a lot of guitar solos, but for this one they seem have lost their inspiration with too much backing vocals.