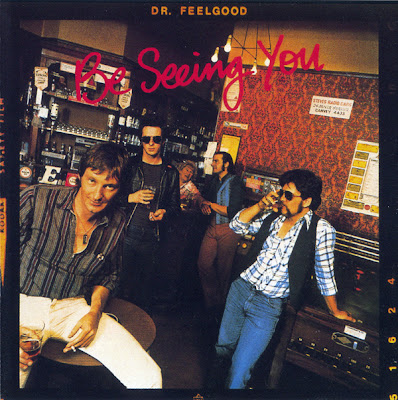 "Be Seeing You" was the fifth album by Dr. Feelgood, and was released in October 1977. After the departure of Wilko Johnson, this was Dr. Feelgood's first album with guitarist Gypie Mayo.
The album reached number 55 in the UK Albums Chart in October 1977, and remained in that chart for only three weeks. It spawned their second single to enter the corresponding UK Singles Chart - "She's A Windup".
The album's title was a catchphrase, used by the band, taken from the cult TV series, The Prisoner, which was enjoying a revival at the time. This theme continued on the album sleeve with the line "produced by Number 2 for Number 6", and included photos of the band in piped blazers and scarves, similar to those used in the series, and some "penny farthing" badges, although the album's front cover was photographed in the band's local pub, the Admiral Jellicoe.

She's A Windup is surely a classic!!!!

Great covers also!!!! Ninety Nine..... and As long As The Price is Right are fantastic!!!

Hi there, thanks for these Dr.Feelgood ones, it would be great if you uploaded the ones by Home, they are on your site but only on the long gone Megaupload site, all the best, Johan

Hi Johan!
Which album of "Home" you want?