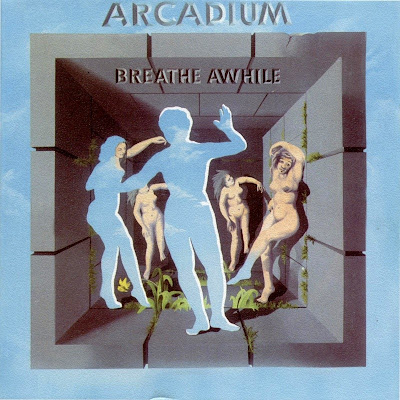 Traditionally, before reading, turn on the music, because the music tells us more about myself than even the best-chosen word :) This album has something of the great, grim secret.

Arcadium was a little known British band that performed at the Middle Earth Club in London back in the late '60s (other artists that performed there were Wooden O, Writing on the Wall, and Tam White). Their one and only album, Breathe Awhile was released on the obscure Middle Earth label, named after the nightclub. Remember, this was 1969, prog rock was going through its growing pains, so many bands still stuck to their psychedelic roots, and of course, Arcadium was no exception.

A leading figure in the Arcadium was the creator of all music, singer Miguel Sergides. If I had to describe their music in the context of other bands have written that it was Vanilla Fudge, The Crazy World Of Arthur Brown and Iron Butterfly may drown existential sadness overwhelmed. Hammondy, guitars, anguished voice Sergidesa (I think this guy really was miserable), sometimes reinforced with choral chants.

The same plate ... full of excitement, contrast and sophisticated beauty - combining great melodies with a natural, raw sound, psychedelic flights, with a strong, almost heavy metal guitars.
Seven tracks the three long (8 to 12 minutes) tracks of mostly slow, solemn and dignified pace. Music is dynamic at times, and sometimes even melancholy. All of this is psychedelic sauce garnished with lots of great Hammond organ and guitar parts. Vocalist - Miguel Sergides - sings as if he were to be the end of the world or death (the best on the album, the last track - in the end is coming). How much sorrow in his voice how much pain and doubt (texts are not too optimistic), powerlessness and pessimism, anguished voice Sergidesa,sometimes reinforced with choral chants. Yes, you can sing (if at all possible) only once in a lifetime. It is not known what the man was doing after the release of this album - hearing about him, was lost

It begins with a long-developed and diverse composition of "I'm On My Way" from the progressive leadership climates, sand storms and adept, to the sharp and strong riffs, played at the end with great verve, passion and conviction.
"Poor Lady" is the absolute - just a vocal revelation, something sad and shocking is the seemingly serene and melodious song.
Psychedelic "Walk On The Bad Side" with a great organ hammond, dirty guitars and vocals pulls przecudownym heart of the breast.
The fourth gem is "Woman Of The Thousand Years", which govern hammondy wonderful, passionate vocals and slightly narcotic refrain from repeating the title phrase.
"Change Me" begins with tasteful, lovely guitar - vocals absolute champion of the world again - there is sadness and nostalgia, but at the same time building a sense of strength and hope. Such a depressing passion and desperation that twenty years later tried to revive the bands from Seattle.
Galloping, fast, "It takes a woman" infects your intensity and an almost heavy metal energy. The album ends with more than 10-minutes, absolutely smashing "Birth, Life and Death." Strength, character, dignity and elegance of this song are incredible. Raw, expressive guitars break the blades that ran hammond give mad rush after 4 minutes of silence, and we have a light rhythm section like the pulse of a sniper for a while before shooting, which has forever changed the course of history. The vocals do not appear until the end of the fifth minutes, calming and transforming soaring flight crazy lazy clouds drifting, trance bath with clouds, dense and soft, cold still intact sun, the crimson ball only tentatively leans over the horizon.

The CD bonus tracks we have, from the single "Sing My Song / Alone" - issued in October 1969. "Sing My Song" and "Ride Alone" is a beautiful ballad, in a slightly psychedelic atmosphere, with vocals where no sorrow to die.