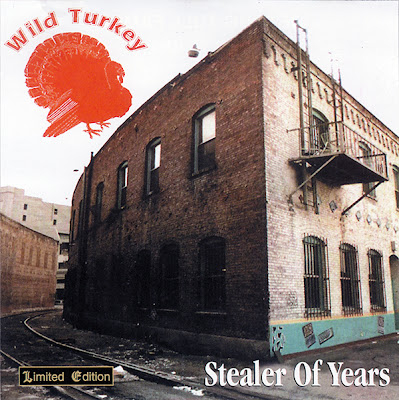 Following his dismissal from Jethro Tull, Glenn Cornick formed Wild Turkey in early 1971. In their brief three year history, the hard rock quintet went through several line-up changes. Wild Turkey recorded two albums for Chrysalis; their 1971 debut Battle Hymn and 1972 follow-up Turkey. After disbanding 1974, the group's members went their separate ways...
After their second album, a series of line-up changes occured, most significantly Bernie Marsden (of later Whitesnake) joined and the band continued touring heavily. Though moderately successful, this line-up wasn’t able to release the third album and eventually broke up in 1974.
Fast forward to 1996 and HTD Records who, out of the blue, invited Turkey to reform and cut a new platter. After initial hesitation, Cornick and Hopkins decided to reunite the band with guitarist Tweke Lewis and new drummer Brian Thomas to record a superb comeback album in the shape of Stealer Of Years. Fourteen new songs were recorded at Digitaff Studios in Wales.
It is an unashamedly 1970′s rock album with nobody trying to sound relevant to 1996 when it was recorded. Kicking off with the funky rhythms of Wrap it Up and Take it Home”, the album has some great riffy songs like Gunslinger, the spaced out Anthem of the Universe and the hauntingly melodic “Far Away Friends”. Though it’s not only seventies-style riff rock, the rest of the album reverts between that unique, Tull-inspired Turkey of the seventies, with more modern, acoustic-based rock that offers great melodies, and some inspired guitar playing by the underrated Lewis.
After some live gigs following the album, the members of Wild Turkey once again went their separate ways.

A new link would be highly appreciated ....