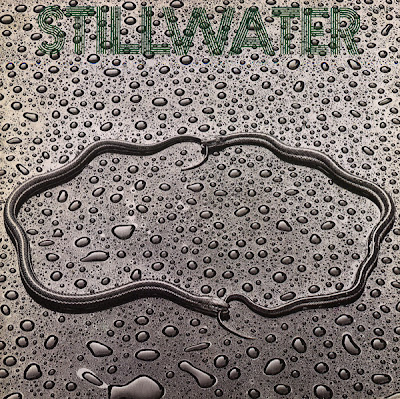 It's not that easy to write a resume of Stillwater, this band was just one of the biggest ones in the southern rock world back in the seventies. Started in 1972 around Milledgeville, Georgia, the band quickly migrate to Macon, Georgia where they'll sign a contract with Capricorn, the label working mainly with southern rock bands. Under the influence of Buddy Buie (their friend form Atlanta Rhythm Section , they'll release a masterpiece as their first album. Songs such as "Mind bender" are still played today on the radio in the US. Stillwater had an enormous imapct on the southern rock fans, playing music somewhere between Marshall Tucker and Atlanta Rythm Section. They'll get a solid reputation and recognition and they'll constantly be on the road with bands such as Charlie Daniels, Foreigner, The outlaws, Atlanta Rhythm Section, Marshall Tucker Band, among others.
This first album was just a pure jewel, guitars the way we like them form Mike Causey, Rob Walker and Bobby Golden, melodic vocals from Sebie Lacey and Jimmy Hall, a rhythm section many bands would like to have, and Bob Spearman on kyeboards. A nice group of musicians, for sure. Stillwater will later inspire Cameron Crowe when he'll write his famous movie, "Almost famous". It was less than a year before the band gets banck to the studio with new songs and they'll release "I reserve the right" in 1978. The band is still at the top even if this new album doesn't get the magic of the first one. But don't get me wrong, this is a great one. Songs such as "I reserve the right", "Keeping myself alive" and "Fair Warning" are some kind of proofs, if necessary. The problem was they didn't get much success with this new album, so Capricorn seemed not to take care of this great band but they keep on playing music, not so often but they're still there. They play at least a reunion show every year.
In 1998, nobody was expecting something from them but they released their third album as a reminder, if needed, that Stillwater was a great band. They wrote fabulous songs with "The big payback", "Let me be your lover", "Somebody to love", "Scarred for life". Once again, they didn't get much recognition but they still live and the city of Macon declared an official Stiilwater day !

There is another rare live album entitled, "Hotels, Motels and Road Shows". Only 2 songs are known to exist from the live album, (1) "Out On A Limb (live), & (2) "Mind Bender (live).
Alex,Thanks a lot.

Thanks for posting this hanalex. I can't seem to get narod to work for me unfortunately. I enter the catcha ok, but the DL does not start up (whether in 10 seconds or even 30 seconds). You reference then clicking on a link under a counter but I don't see that anywhere. I think the narod pages have changed since you put the instructions up on your home page.

@Jamie:
I'm sorry, but the instruction has not changed. I don't know what's the problem: the link is working, tested...
Try to mark the checkbox on the download page.

Ahanalex. I have properly entered the captcha and the submit button below it. That takes me to a new page - the stillwater file is noted in my browser window - it's the same file name that is in the box in the upper right hand of the page. I'm guessing that there is a "download now" button that is in Russian that I'm not clicking on because I don't read Russian - though I think I've tried clicking on just about everything on that page by now. I'm sure the problem is that the only word I know in Russian is nyet...LOL!

Any chance you might consider posting it to the H&H site via peeje?

Jamie, you have the problem again?
The file on Narod downloaded more than 80 times.
I think it's not just knowing the Russian language.
Peeje - very unreliable host, but I re-upload Stillwater on Netkups...
Link added.

Thanks for this gem. The Narod link works fine for me

Great classic album that deserve to be reissued. Their second album is also excellent. The false group Stillwater from the movie "Almost Famous" in a another genre is very good too, i didn't knew that there was a 2LP limited edition, now of course very rare and sought. Thanks for the sharing hanalex.

thank you. I didnt buy the vinyl because I didnt like it very much. I will listen to it again and if I like it, I will buy it, if possible.
pat-rocker

Awesome band,one of my favourite....